Binary art takes shape in experiments like Brion Gysin’s Dreamachine (circa 1960). The Dreamachine is a cylindrical modulating light that rapidly flickers through a perforated pattern and causes one to enter a dream-like hallucinogenic state.

“Dreamachine visions usually begin by the meteorically rapid transit of infinite series of abstract elements. These may be followed in time by clear perception of faces, figures and the apparent entractment of highly colored serial pseudo-events. In other words, dreams in color.”

The shape of Gysin’s design is similiar to Fillippo Dell’Orto’s elongated Hal 9003, whichÂ combinesÂ solid form with transparency and illumination, creating radical a form that pleases both the eyes and the senses. 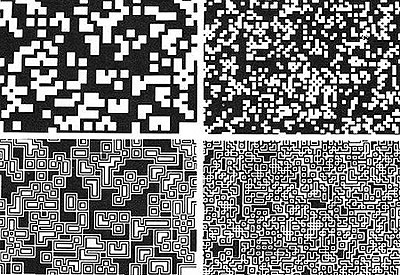 The theory that Progress is a stepping stone toward some elevated plane of existence is not necessarily a time based, linear notion. The chaos theory proves (to the extent that it is derived) the multifaceted array of the “seemingly” random order of time. The generation of a fractal is one way to describe this theory in motion. Things change yet nothing changes — simultaneously.

Kenneth Knowlton, pioneer of binary art and theory, examined the nature of progress through interactivity. “The computer does not make it possible to define or execute complex processes â€” this possibility exists independently â€” but the computer does make execution fast enough to be done interactively with further human decisions, accurate enough to avoid mistakes, and cheap enough to afford a great deal of experimentation. Whether the computer is defining a new branch of art is an open and difficult question, particularly in the area of works defined entirely by logic.”

He and many other artists of this era have formed a valid argument against the notion of Progress as linear. This is evident in their experimentation with geometry and patterns generated by early computer programs. 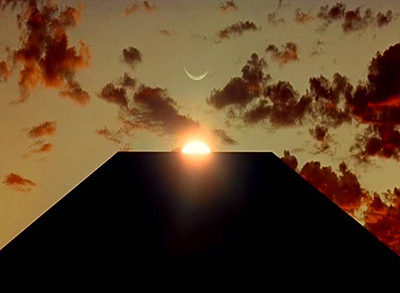 Have you ever wondered what exists beyond the scope of human intelligence? Is there such a thing as an original idea? What ever happened to idealistic vision of â€œThe Futureâ€ promised by some of the great minds of the 20th Century?

Welcome to sixdifferentways.com, your portal to Space Age thought, design, technology, and Beyond! The intent of this blog is to promote forward thinking and innovation within a positive environment. We will discuss the contributions, past and present, that have propelled the evolution from Modernism through Post Modernism to our current cultural climate.