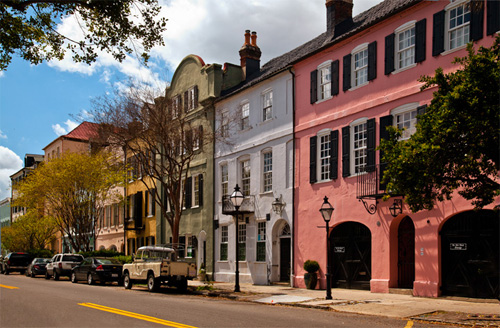 It’s no surprise that the infamous street known as “Rainbow Row” in Charleston, South Carolina is a huge tourist attraction when heading down south. Rainbow Row is a series of thirteen colorful row houses painted in pastel blues, yellows, pinks and greens located on East Bay Street.

In 1778, a fire destroyed much of the neighborhood but only a small number of houses were spared on the street. In 1931, a section of these houses were purchased in hopes to one day restore them. Eventually, funds were gathered to restore a few of the homes and were painted in pale pinks to resemble a colonial Caribbean color scheme. Overtime the remaining houses were restored and the new owners sought to continue the trend by painting their houses in the present day pastel colors.

“Rainbow Row” used to be located directly on the riverfront of the Cooper River before it was filled in later on. A common myth behind the using of the brightly colored paint was so that intoxicated sailors would know which home was theirs when coming into port!